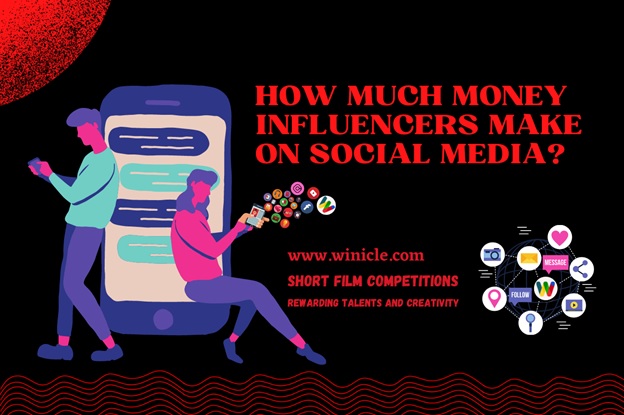 Are you new to the world of influencer marketing and you want to start your successful career. What does success mean to you? Do you want to make money on your channel on social media or do you want to have a greater impact on the world-or maybe both?

If you already have a few thousand followers on any of the mainstream social media like Tiktok, Winicle, Instagram, Youtube or Moj then you already know how the game works. In this case, the next step for you is to slowly climb the ladder as a social media influencer and increase your followers to make your channel standout.

Now if your goal is to make money, continue reading the rest of this article to get a feeling of how much do influencers really make.

Main ways of making money as an influencer

Let’s first look at the main ways in 2022 that social media influencers are leveraging their skills, expertise and influence to make money from multiple revenue streams by supporting brands and companies with their digital marketing and advertising.

Now there are more ways of making money by influencers such as hosting events, affiliate marketing, selling physical or digital products, running webinars and podcasts.

We couldn’t finish this section without mentioning how some influencers make money with their short films! Influencers can participate in short film challenges and competitions for free and make money when their videos receive the most likes from other users. Making money from reels and shorts are becoming very popular with the rise of popularity in TikTok, Youtube shorts, Winicle short films and Instagram reels. Some of the social media platforms such as Winicle run regular free reel competitions where you can participate for free and upload your short films. At the end of the competition when a video receives the most likes and becomes viral the influencer receives cash prizes which can be a great revenue stream. To make money with reels and shorts you don’t need to have many followers so it is a great way of making money for new influencers.

Examples of how much influencers make on social media in 2022

Let’s go through some of the real examples of how much influencers make money. The newest way of making money by influencers is by shorts and reels. With short films the influencers can make anything between $25 to $1000 for a given reel. So, if you win only 10 reel challenges in a year you have already made an average of $3000 to $5000-not bad for an influencer who just started his career. Now the other positive side of making money with short film competitions is that you also organically increase the number of your followers. All that matters to make money with shorts and reels on Winicle is to have great videos. You can start with 100 to 1000 followers and still make money for your shorts.

If you’re a social media influencer and want to start monetizing your influence you have an expectation in mind on how much money you want to make. Depending on your expectation you should focus on one or more ways of making money discussed earlier. It is likely that if you have just started your career, you only have 100 or 1000 followers. With a small number of followers, it will be hard to make money from sponsored posts, or by becoming brand ambassadors. It is more practical if you focus on creating great short films and reels and participate in short film contests for free. Shorts and reels are the newest way of making money by influencers on social media, this way you make more followers organically and at the same time you make money when your shorts and reels become viral.

Could You Live for One Week Without Internet Access?

A Guide To Efficient SEO Implementation